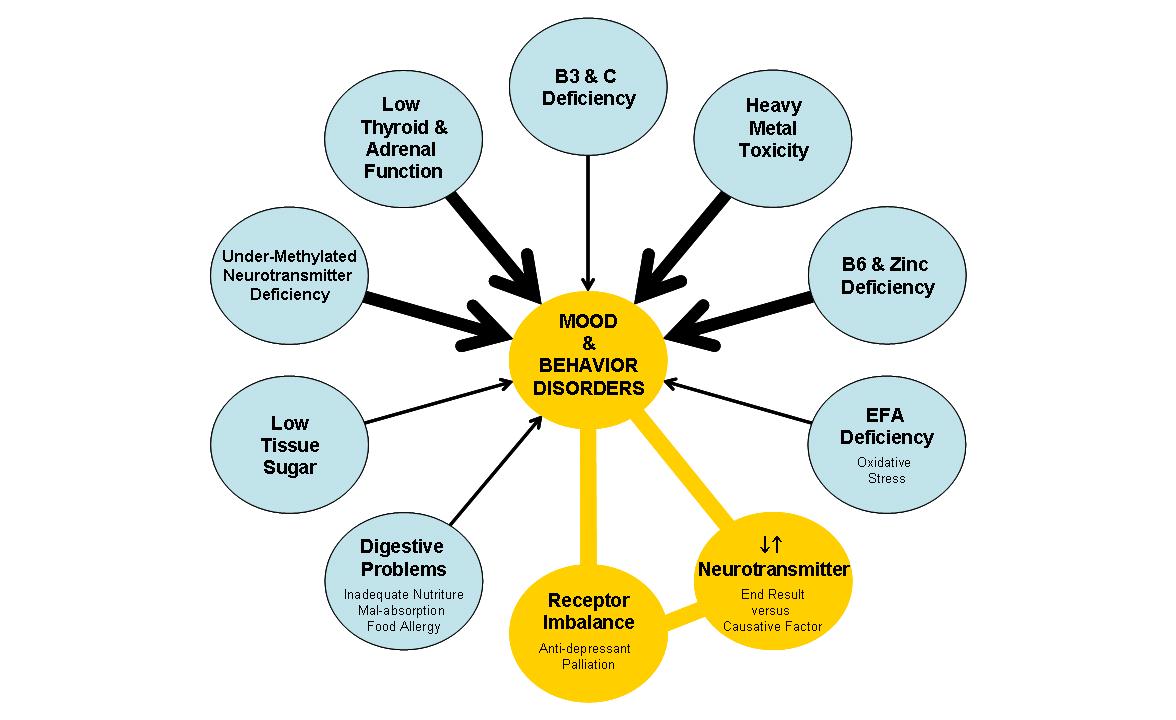 Kid specific aspects of orthomolecular treatment will be the focus of this series.  Mood and behavior conditions that we are looking at include anxiety, severe depression, bipolar disorder, hormonal depression, other endogenous depressions (cyclothymia, seasonal affective disorder), OCD, ADHD, ODD and, addictive behavior.  Kids emerging from their early teens sometimes face early onset psychosis so we have dedicated an orthomolecular treatment article on this topic as well.  Kids with autism spectrum can benefit from orthomolecular treatment and although this series does not cover that subject, families are encouraged to examine the International Schizophrenia Foundation archive and referral network.

Biochemical syndromes of importance for kids with mood and behavior disorders are those that ultimately influence neurotransmitter production, release, inhibition, and signal transduction.1

Kids with mood and behavior disorders have similar nutritional imbalances to adults and there is often an overlapping of symptoms and diagnoses.

Anxiety, for example, often coexists with depression.  Depression often involves negative thought rumination and sadness.  Stoic depressive kids rarely smile and are locked in despair sometimes with suicidal thoughts.  Suicidal propensity is global in patients with depression, anxiety and behavior disorders.  Obsessive thinking is commonly found in anxiety disorder cases but, is not diagnostic for obsessive compulsive disorder (OCD) unless it is so severe that it profoundly interferes with thinking and behavior.  Kids with addictive behavior often have co-existing mood dysfunction, behavior disorders, or sometimes schizophrenia.  Addictive behavior ranges from the realm of illicit substance use and alcoholism to compulsive behaviors and gaming addictions.  Kids with anxiety are over-stimulated and in advanced stages this is disruptive.  Anxiety can be associated with phobic disorders and in some cases schizophrenia.  Over-stimulated states of anxiety are typically uncomfortable and not productive (i.e. your performance level is diminished).  Conversely, in bipolar/manic depression, over-stimulated states (mania) can often be productive with reports of accomplishing tasks with immense intensity and creativity.  In bipolar disorder, mood often cycles to a deep depressive burn out phase.  In depression and anxiety we often see inattention which can be mild or, in severe cases, interfere with thought processing.  In children and adults, advanced inattention can be seen as a pure component of ADHD.  Inattention can be due to ‘thought blocking’ which is an interruption in the processing of thoughts for short periods of time; thought blocking is commonly seen in kids with heavy metal excess.  Irritability is found globally in all mental illness; anger and irritability are often linked to the ‘stuckedness’ of depression or hypoglycemic (low blood sugar) tendencies.  Anger can extend into the realm of criminal behavior.

Neurotransmitter deficient syndromes in kids with mood and behavior disorders

Part Two of this series will cover Under-Methylated Kids and Kids with Heavy Metals.

MindCheck is the Weekly Wednesday Kids Mental Health series with Dr. Ray Pataracchia, N.D.   MindCheck provides in depth information on the orthomolecular approach to coping with mood and/or behavior disorders. The MindCheck Health Series is endorsed by the Mindful Network – ‘A Better Future for Children’s Mental Health’.